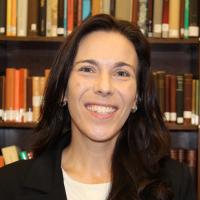 Jessica H. Clark (PhD Princeton, 2008) is an Associate Professor in the Department of Classics, specializing in the Roman Republic, and has taught at Florida State since 2013. She was previously an assistant professor of History at California State University, Chico (2008-2013), where she taught Greek, Roman, and world history. Her first book, Triumph in Defeat: Military Loss and the Roman Republic (Oxford, 2014), examined the ways in which Roman political actors responded to battlefield loss in the Second Punic War and the following century. She continued this research project as co-editor of Brill’s Companion to Military Defeat in Ancient Mediterranean Society (2018).

Her research currently focuses on war and military service, as represented in Latin literature of the second and first centuries BCE, both prose and verse. She is also interested in issues of textual transmission, particularly of fragmentary texts, and women and gender in the Roman Republic.

“The Annals as Historical Evidence in Ancient and Modern Commentaries.” Forthcoming in Ennius, Poetry, and History, ed. Cynthia Damon and Joseph Farrell (2020). Cambridge.

“Anecdotal History and the Social War.” Forthcoming in Romans at War: Citizens and Society in the Roman Republic, ed. Michael Fronda and Jeremy Armstrong (2019). Routledge.