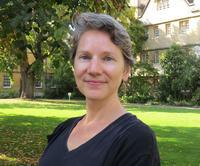 Laurel Fulkerson received all of her degrees from Columbia University (BA in Classics, MA in Latin, M.Phil. in Classics, Ph.D. in Classics), and has been a faculty member in the Classics department at the Florida State University in Tallahassee since 2000.  Her scholarly work within Classics focuses on three basic areas: Latin poetry; ancient women’s history and gender studies; and the emotions in antiquity.  She has written or edited the following books: The Ovidian Heroine as Author: Reading, Writing, and Community in the Heroides (2005, Cambridge University Press); No Regrets: Remorse in Classical Antiquity (2013, Oxford University Press); Emotions between Greece and Rome, co-edited with Douglas Cairns (2015, BICS Supplement); Ovid: A Poet on the Margins (2016, Bloomsbury); Repeat Performances: Ovidian Repetition and the Metamorphoses, co-edited with Tim Stover (2016, University of Wisconsin Press); and A Literary Commentary on the Elegies of the Appendix Tibulliana (2017, Oxford University Press).  She is currently co-authoring a history of Latin literature of the second and first centuries BCE and a commentary on the pseudo-Vergilian Ciris.  She edited The Classical Journal, a leading journal in her field, from 2010-2016, and she has won graduate and undergraduate teaching awards at national and University levels.