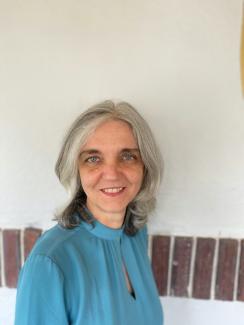 Professor Slaveva-Griffin specializes in ancient philosophy and history of science and medicine in late antiquity, with secondary interests in education and religion. She started her education in Classics at the National School for Ancient Languages and Civilizations (Sofia, Bulgaria). She obtained a B.A. in Classical Philology from the University of Sofia (Bulgaria) and a Ph.D. in Classics from the University of Iowa. Professor Slaveva-Griffin’s research is focused on the relation between metaphysics and mathematics, science and epistemology, and philosophy and medicine. Her book Plotinus on Number (Oxford University Press 2009) reconstructs Plotinus’ understanding of number as a building block of reality in the context of the long Pythagorean and Neopythagorean legacy of the subject. It demonstrates the foundational role of number in Plotinus’ metaphysics and epistemology. She has co-edited, with Pauliina Remes, The Routledge Companion to Neoplatonism (Routledge 2014), which was recognized as Routledge Outstanding Academic Title in Philosophy for 2015 and Choice’s Essential Academic Title for 2015. Her co-edited volume, with Ilaria L. E. Ramelli, Lovers of the Soul, Lovers of the Body: Philosophical and Religious Perspectives in Late Antiquity is forthcoming (Harvard University Press, Center for Hellenic Studies, Hellenic Series). She is currently working on a project examining the Neoplatonists’ interests in medicine, health, and the physician. Her research has been recognized by the Wellcome Trust, FSU Council on Research and Creativity, and the Alexander von Humboldt Foundation.

Professor Slaveva-Griffin offers courses on ancient philosophy and the history of science and medicine. Her teaching has been recognized by university and national teaching and mentoring nominations and awards.